Are you having thoughts about packing up and moving to Texas ? A brilliant decision, in our opinion. First of all, you would say goodbye to the cold months since Texas has a pleasant year-round warm climate. And with its booming job opportunities, you can easily find work in your preferred field.
But an important question must be asked before moving to a new state, what are the living costs like? How much would utilities cost? The good news is that Texas has relatively low average utility costs compared to other states. For example, if you decide to move to Connecticut, you would find a monthly utility cost of around $440 on average.
Keep reading this article as we dive into the estimated utility bill you would have to pay if you were to move to Texas. And some tips that could help you cut down on those utilities price. 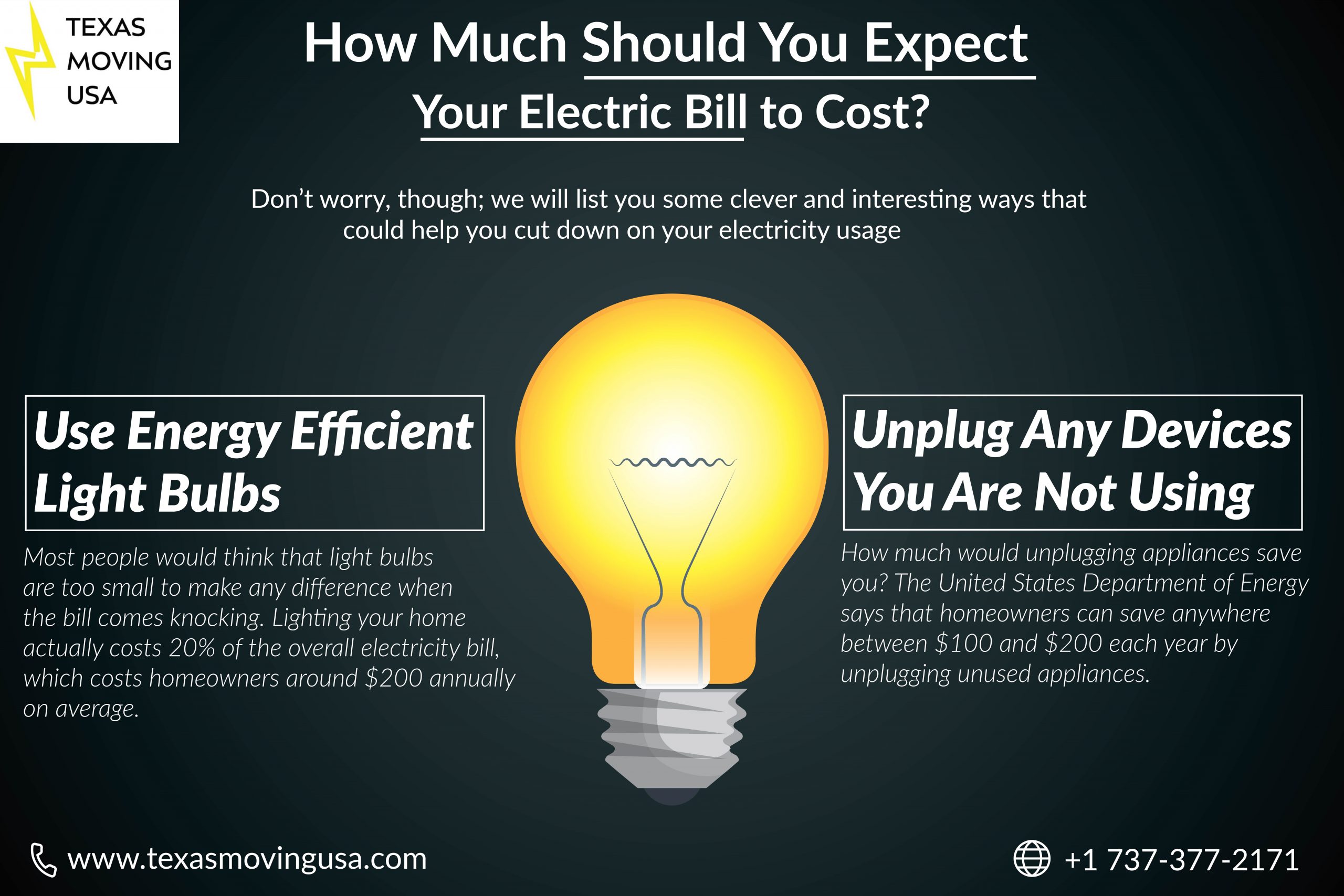 How Much Should You Expect Your Electric Bill to Cost?

The first and most intuitive thing you think about when someone mentions bills is probably electricity. While you would not find the highest average utility costs in Texas, the electricity bill in Texas is higher than the overall US average .
According to the United States Energy Information Administration, the average electric bill in the United States is $117.65 . Not too bad. In Texas, however, you can expect to pay somewhere around $140.
You must be wondering why it’s so much higher than the average by now. That’s because of the winter storm that hit Texas in February earlier this year. Texas actually hit the electricity bill price cap in that storm. Usually, the price cap would be hit during the summer months.
Don’t worry, though; we will list you some clever and interesting ways that could help you cut down on your electricity usage.

Most people would think that light bulbs are too small to make any difference when the bill comes knocking. Lighting your home actually costs 20% of the overall electricity bill, which costs homeowners around $200 annually on average.
If you make a choice to swap out your old incandescent light bulbs (those are the old yellow ones) with newer, more energy-efficient light-emitting diode bulbs (LEDs), you can expect to save around 80% of the electricity used to light up your house.

Unplug Any Devices You Are Not Using

How much would unplugging appliances save you? The United States Department of Energy says that homeowners can save anywhere between $100 and $200 each year by unplugging unused appliances.

How Much Is the Water Bill in Texas?

Texas has much lower water costs than the US average. The water bill differs a lot depending on the size of the house and its residents. One person would not pay the same water bill as a family of four.
The US water bill is $337.60 on average per year per household. In Texas, though, the yearly average is $288.43. Don’t let it fool you, though. The water bill will vary substantially depending on the city.
If you were to move to the city of Lubbock, you would expect an annual water bill of around $474.60. Move to Wichita Falls, and you will be finding an average water bill of $516.43. Almost double the Texas average.
The water bill in smaller cities is more expensive than in bigger cities since in a smaller city, the cost of getting water there is distributed among a smaller group of people than in a bigger, more crowded city where the cost is distributed among its many citizens.
Nevertheless, no matter where you live, you wouldn’t mind saving some money on your water bills. So here are a few ways to reduce your water consumption and, therefore, your water bill.

Showering accounts for 17% of the overall water bill. Showers are the third most significant source of water consumption after washing machines and toilets. A person showers for 8.2 minutes on average and uses 17.2 gallons (65.1 liters) in those 8 minutes. The water flow rate of showers is approximately 2.1 gallons per minute (GPM) or 7.9 liters per minute (LPM).
A water-efficient showerhead can save around 7 gallons of water (26 liters) in a 7-minute shower. Which adds up to 2377 gallons (9000 liters) saved every year. 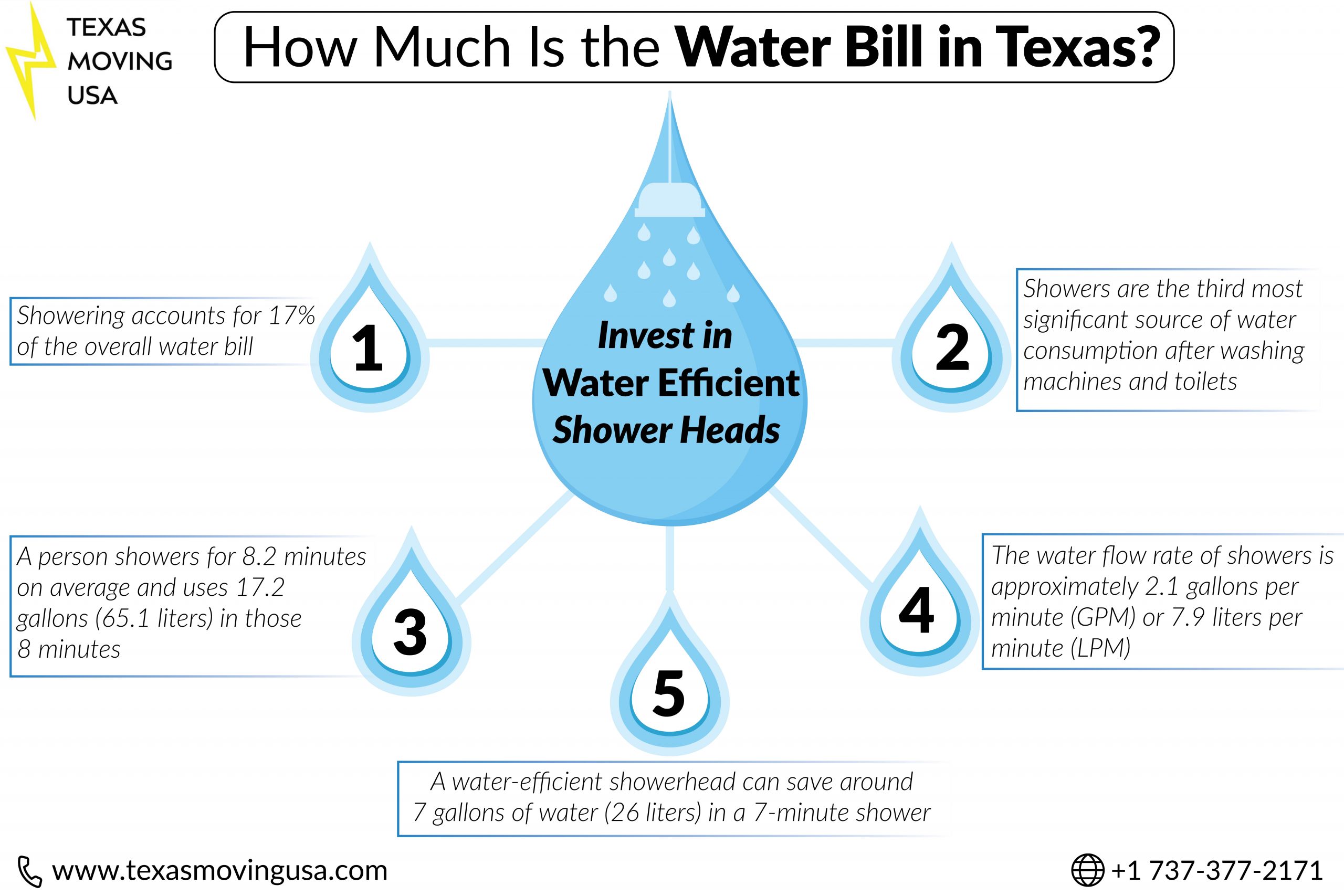 How Much Is the Natural Gas Bill in Texas?

A lot of people rely on natural gas for heating their houses and apartments. Not all people do, though. Around 70% of people use natural gas furnaces to heat their homes, the other 30% mainly being electric furnaces, especially in northern states.
The situation is a little bit different in Texas. Since Texas's climate is warmer overall than most other states, high-performance natural gas heaters aren't needed as much as in the northern states. As a result, electric heaters typically have the lowest upfront costs. This is why only 40 percent of people living in Texas opt for natural gas heaters .
Still, 40% of Texas is a lot of people, and those people typically have to pay a natural gas bill of $110.58 on average , which is pretty good compared to other states and the US average. In fact, Texas ranks the 12th lowest according to natural gas prices.

Some homes have relatively poor heat insulation, which puts more pressure on the heating system to keep up with heat seeping into the house in the cold months and effortlessly out of the house in the hotter summer months.
As you might expect, having good heat insulation installed can significantly reduce the amount of energy needed to heat or cool the house. The Environmental Protection Agency (EPA) says that people can save 15% of all heating and cooling costs by adding quality insulation in the crawl spaces and attics , saving the average Joe about $200 every year. 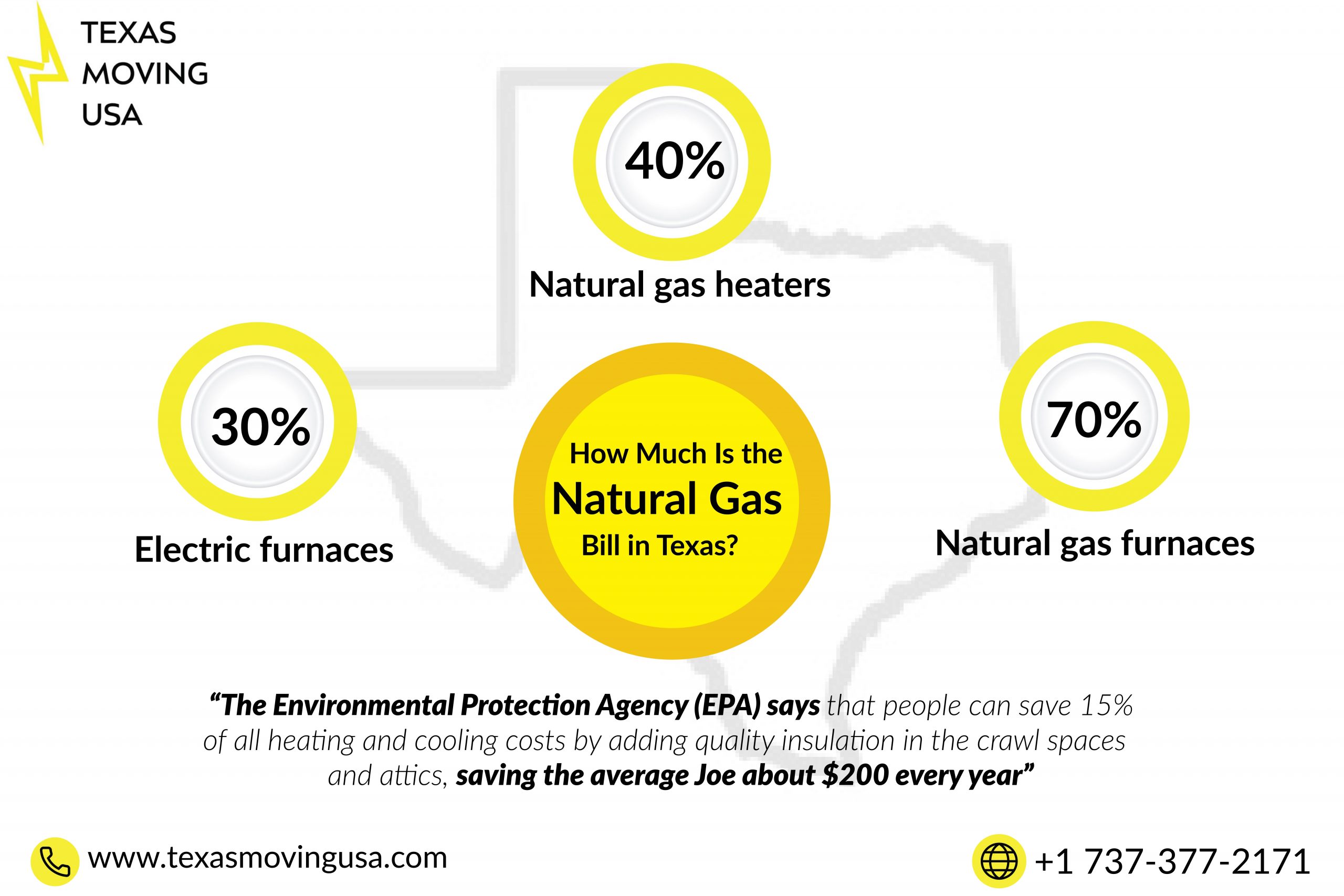 How Much Would You Pay for Cable and Internet?

If you move to Texas, you should expect to pay a cable bill of around $85 per month .
However, some people nowadays say that cable is old-fashioned, so they stop paying for it entirely and instead opt for internet streaming services such as Netflix, Hulu, Disney+, and many others. Most of these streaming services cost you around $10 per service each month.
It's also a pretty good argument if you think about it. A ten-dollar Netflix subscription offers you a vast collection of movies and TV shows to choose from. So you watch whatever you want, whenever you want, and pay substantially less.
A problem with cable is that some people pay for full cable subscriptions and pay for channels they don't even watch. If you use cable, we suggest you spend a few minutes thinking about what you pay for, and if it's useful for you or not. If not, only pay for the ones you find entertaining and watch regularly.
As for the internet, the average monthly cost of internet in Dallas is $60 per month . Although a problem some people have is paying for the internet that they don't use.
If you only use the internet to check emails, you shouldn't pay for the internet like a person who uses it for streaming daily. Check your data usage and pay for what you need, not more. If you need to reduce internet costs, you can opt for less quota or slower speeds.

Car Gas Is Also a Utility

There are definitely people out there who would argue against gasoline being a utility. But according to the Small Business Administration, gas is also a utility. It's not easy to give you an estimate of how much you'd be paying for gas, though, since it mainly depends on the fuel economy of your car and how much you drive.
For example, a sports car with a V8 engine would use substantially more fuel than a typical mid-range sedan that the average person drives. You should also expect to pay more for fuel than a sedan or a hatchback if you drive a pickup truck.
Hybrid cars are the most economical. One of the most popular cars is the Toyota Prius. If you drive one of those, you are probably one of the people who don’t have to worry about gas very much.
We can, however, tell you that Texas has the 4th cheapest gas prices . $2.942 for a regular gallon and $3.258 for a mid-grade gallon.

How Much Is Everything Going to Cost You?

Adding everything we just talked about together, that’s a total of $419 , divided into $140 for electricity, $24 for water monthly, $110 for natural gas, $85 for cable, and $60 for the internet. That is how much the average Texan pays each month without factoring in the money-saving tricks we listed in each section.

Utilities in Texas depend on where you live, but it's just a part of the story. These resources can give you some help with your move planning.
How to Spot a Moving Scam
Moving scams can stop your moving plans dead. Here's how to spot a moving scam early.
Best Time to Move
What’s the best time to move ? In this article, we cover the pros and cons of each season.
Moving Tips for Seniors
Moving with a Senior in tow can mean making crucial decisions for your move. For families that need it, here are some moving tips for seniors .
Long Distance Moving Cost Calculator
What's the potential cost of your long-distance move? Find out with our long distance moving cost calculator .
5 Steps to Take when Preparing to Interstate Move
Moving between states can be hectic, but with the right planning it’s not so bad. Here are 5 steps to take when preparing to interstate move .